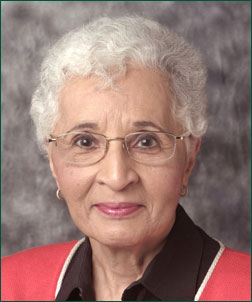 A petite dynamo, impeccably turned out, Nettie Harris Seabrooks has risen to the top in every enterprise she has tackled. Her successes have come from hard work and by anticipating the next step or need and, most importantly, by following her personal motto: "Integrity in everything I do is basic to everything else. Also, I stand on my word."

In l991, during the exploratory phase of his eventual run for mayor, Dennis Archer "...reached out to Nettie Seabrooks, because of her intellect and scholarship, to assist in analyzing the problems, to assist in developing solutions and then to help communicate our findings to the voting public, the metropolitan area and citizens of Michigan. We held a series of public forums and my announcement as a mayoral candidate at Marygrove College."

When he was elected in l992, Mayor Archer asked Seabrooks to join his team. She served first as Mayor Archer's Deputy Mayor, then as Chief of Staff and Chief Operating Officer, the first woman to take on these responsibilities. She left behind a distinguished career that spanned 31 years at General Motors, the first African American woman executive at the company. Seabrook's path led to GM when, unable to find a job in the chemistry field, she earned a Masters in Library Science at the University of Michigan. She had heeded the advice of Dr. George Brewer, chairman of the Marygrove Chemistry Department, who told her, "There is so much need there; they won't worry about your race." Her Marygrove Bachelor's degree was in Chemistry.

She overcame the racial and gender barriers and became the second black person hired of the 4,000 people in the GM Headquarters staff and she plunged wholeheartedly into reference research. Seabrooks' career at GM, where she rose from Assistant Librarian to Director of Government and Civic Affairs for GM's North American Passenger Car Platforms, is the subject of a case study chapter in Influence Without Authority, a 2005 business textbook by Allan R. Cohen and David L. Bradford. The chapter is tellingly titled, "The Career of Nettie Seabrooks and Influence Against All Odds." The authors emphasize that her proactive approach to her work at every level, while always keeping in mind the interests of the corporation, served her well in her career development. The Michigan Women's Foundation called Nettie Seabrooks a "Trailblazer in corporate America, accomplishing many firsts for women and minorities as a leader in the public and private sector." She received the foundation's Women of Achievement & Courage Award in 2002.

At a time when most have chosen retirement, Seabrooks is working to make another institution healthy, strong and accessible to the public. She is the Chief Operating Officer of The Detroit Institute of Arts during this period of major structural expansion and renovation. Passionate about learning, she is completing another Master's degree, appropriately in Art History, from Wayne State University.

Seabrooks says, "Marygrove gave me the confidence to go on to graduate school and overcome the challenge of not being able to find a job as a chemist either because I was a woman or African American." Returning the compliment, former Marygrove president, Dr. John E. Shay, Jr., says "A competent, compassionate woman, Nettie has been committed to Marygrove College for as long as I have known her. I was delighted when she joined our Board of Trustees and I came to rely upon her candid and thoughtful advice on some of the College's most serious issues during my presidency. In my estimation, she exemplifies what it means to be 'Distinguished.'"

Seabrooks served with distinction for eight years on the board of the Detroit Medical Center during a period of change, consolidation and the ever-present fiscal problems. She now uses her expertise as a member of the board of the Karamanos Cancer Institute and the Detroit Riverfront Conservancy.

She was awarded Honorary Doctorates of Humane Letters by the University of Detroit Mercy and by Marygrove College.

When asked what wisdom she would share with today's students, Seabrooks replied, "I would tell them the same thing I said to my son and daughter when they went to college: take advantage of everything that your school has to offer you and that means not only putting appropriate effort into your course work, but also other opportunities to grow. This would include extracurricular activities and volunteering."

Mary Kay Harris Piper '57 describes her sister as "...the backbone of the family. Nettie is always there to help whoever needs it." She demonstrated that by "... the fact that Nettie gave up a great job at GM, which she loved, when asked by Mayor Archer to help the city in his administration."