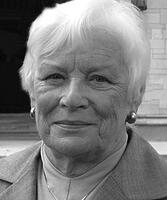 Seemingly destined to make a career in the word business, Mary D. Moore Hubbell penciled columns, ads and scribbled body copy on her mother's pad of linen weave letter paper. The six-year-old entrepreneur then sold them to the neighbors for a penny a piece.

Years later, a semester away from receiving her journalism degree, Mary D. enrolled in a new radio/TV writing and production class at Marygrove. This gave her a leg up in landing an advertising agency job immediately after graduation, where she wrote and produced supermarket commercials.

Mary D. spent a number of years as a stay-at-home mother of six sons and squeezed in volunteering. As an elected member of the St. Mary of Redford Parish Council, she wrote and tabulated a survey to determine how parishioners felt about the post-Vatican II changes in the Church. She also produced the weekly "Detroit Show" for then-Mayor Roman Gribbs. The show presented a positive view of the city's public and private sectors.

Once all of her children were in school, she joined the public relations department at The Detroit Institute of Arts. She managed a variety of writing assignments, including the monthly museum calendar and promotion for a traveling exhibition program. Her representation of the museum to community-based organizations led to her selection as the first Executive Director of the University Cultural Center Association, a consortium of 17 institutions including the Art Institute, Wayne State University, Detroit Historical Museum and the Detroit Public Library-Main branch.

While at the University Cultural Center Association (UCCA), she launched Children's Day in conjunction with the annual International Freedom Festival. Mary D. was presented with the Paul Lutzier award by Detroit Renaissance for Children's Day, sharing the dais with H. Ross Perot who, that same year, received the international award for rescuing his company's employees who were held hostage in Iran.

Mary D. also managed other UCCA projects including: area-wide directional signage, curb cuts for the handicapped made possible by a federal block grant, a bus service, promotional materials and public service announcements. She also convinced the Michigan Department of Corrections to set up a citizen advisory board at the Woodward Pre-release Center that housed 150 prisoners in a former motel. She arranged for prisoners to get job experience at several institutions through a state-sponsored work program and obtained recreational equipment for them from the Detroit Recreation Department. She also planned and promoted the popular Noel Night each December.

In 1985, Mary D. was appointed Director of Communications at New Detroit, Inc., the nation's first and largest urban coalition, where she was responsible for internal and external communications. She wrote a public relations guidebook for community-based organizations, speeches, op-ed articles and published NOW magazine and the annual report.

Mary D's sister, Denise Even, writes, "As the oldest child of my widowed mother of six children, Mary D. was relied on by all of us for sound advice and assistance whenever it was needed. I vividly recall her active life while she was deeply involved in many organizations while raising her six children. Her sense of purpose in all she did was remarkable. I learned of her love of Marygrove early in my life when I attended the Marygrove Nursery School and Kindergarten when my sisters were attending Marygrove College."

Several of her volunteer commitments stand out. She was a member of the Public Administration Foundation which sought to enhance the image of public service careers. She wrote codes of ethics for elected officials and public administrators which were used in university curricula and presented for adoption by the appropriate professional organizations.

A graduate of the first Leadership Detroit yearlong seminar program, Mary D. was instrumental in forming an alumni group and served as president for one year. She served several terms on allocation panels for United Way for Southeast Michigan. As a member of the public relations committee for the Accounting Aid Society, she often wrote profiles for their newsletter. Mary D. also served two terms on the board of Barat Human Services, a residential and counseling program for troubled girls and families.