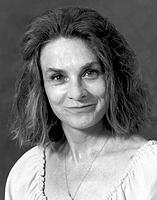 Dr. Elsa Potter is widely viewed as an ambassador of goodwill. After graduating from Marygrove in 1960 with a bachelor's in Spanish, she attended the University of Detroit where she earned a master's in theology, and then Oakland University where she earned a master's in elementary education. She received a doctorate in education from Texas A & M. And then the momentum of her life's work shifted into high gear.

An assignment with the Peace Corps from 1978 to 1980 took her to Nicaragua and West Africa and started her on a journey to help create world peace. After returning home, she began focusing on ways to improve people's quality of life through greater communication. She began teaching the Interlingua program, which is designed to bring people who speak English together with people who speak Spanish, at the YMCA of Austin, Texas.

In 1994 she founded the International Institute of Culture and Language (IICL), a small educational and charitable non-profit institution. Now in its eleventh year, the IICL has sponsored a monthly series of meetings in the Austin area that foster Islamic-Christian dialogues.

"She regularly gathers Muslims and Christians to dialogue about their beliefs, values and lifestyles. The dialogues focus on sharing so that each group may come to a greater understanding and appreciation of each other," says Marie Andre Walsh, IHM '39. "Elsa speaks with a great deal of warmth and sincerity about the value of understanding those whom we look upon with suspicion, and perhaps even fear, because we simply do not know them."

As founder of IICL, Potter pitches in and does what needs to be done. "She washes dishes after meetings, handles mail, and produces media events," say Victor and Carla Sevier, colleagues at IICL. "Elsa and this organization take the world as it is and strive to bring it to a more promising, happy state." "Long before 'multiculturalism' became a household word, and fostering intercultural dialogues and understanding became goals for many, Elsa worked with others in Texas and elsewhere to institutionalize a process to make that a reality," says Sister Amata Miller, IHM.

Potter has received recognition and thanks for her life-long work on behalf of intercultural understanding. She received the Austin Woman of the Month Award in 1999. She also received the Beyond War Award, the Goodwill Employee of the Month Award, the Hildago Award, and a Giraffe Commendation in 1998 for "standing tall and taking responsibility for making the world a better place." As a devoted volunteer for the Santa Julia Food Pantry for the Elderly, Potter helps provide basic food items to the less fortunate in the community. Distribution includes heavy physical work under adverse weather conditions.

"Elsa is an excellent Christian role model and is an extremely valuable asset to our ministry and community," says Dolores Saucedo, food pantry director.

"I know beyond any doubt that a lot of Marygrove went into me at the time, and I'm still trying to live up to it, trying to live out ever more of that meaning. Above all, the religious and social-action program ingrained in me a deep and sincere fellow-feeling," says Potter. "Once seized by the conviction I have of my life's purpose, tenacity to that purpose continues to drive my existence."